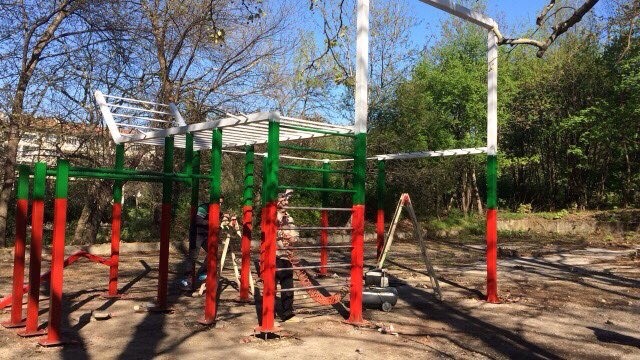 On the 19th of May, 2017 the new outdoor gym in Pleven will be officially open for visitors. The gym is located in park “10-ti Septemvri”, on the back of “Hristo Smirnenski” School, and it is the first outdoor fitness facility of this magnitude in the city.

Built entirely by donations on a terrain, generously granted by Pleven Municipality, the construction is designed for people over 14 years old, and it is equipped with wall bars, two parallel bars installations, three pull-up horizontal bars, gym rings, climbing ropes, roman chair abdominal bench, and push-up devices. The gym is located in park “10th December” (behind Hristo Smirnenski School). The funds are provided by “Pleven Marathon 2016”, and the NGO “Ritzari bez bronya” (Knights without armor), and the project will be managed by Pleven Municipality in connection with the mass sport development in the city.

The outdoor gyms are increasingly becoming an accessible means of active mass sport outside They are a great alternative for physical activity as well as a way for people of different ages, especially the youngest, to be socialized.